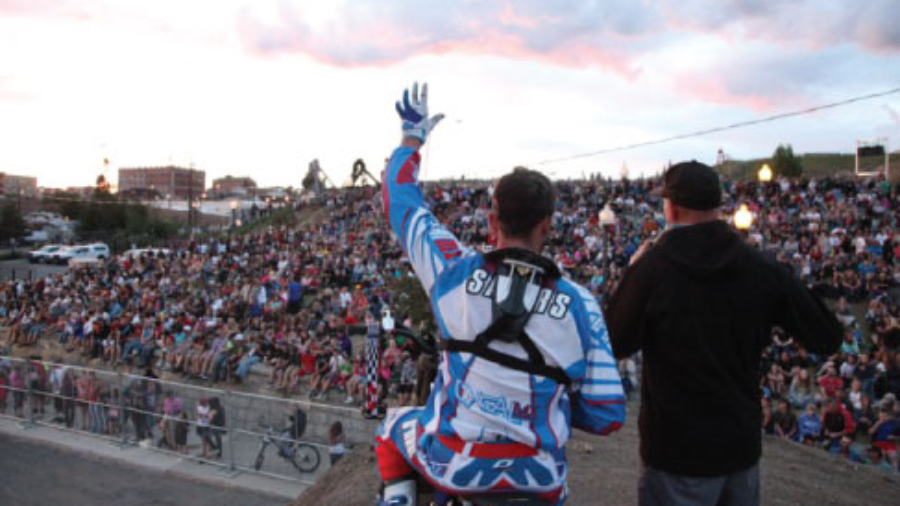 The 2011 Evel Knievel Days is in the books and it turned out to be an event of epic proportions.  A lot of exciting things took place as well as some disappointment but ultimately it was a great tribute for the late dare devil phenom!  Keith Sayers and company put on an impressive three day list of freestyle motocross exhibitions.  This years list of riders included some of the best in the business throwing down on the streets of Butte, MT.  Drake McElroy, Jim McNeil, Kenny Bell, Heath Frisby, Steve Haughelstine and Russ Warren all rode moto and Cody Cavanaugh rode his quad.   The weather could not have cooperated any better and it seemed as though with each new exhibition that the crowd continued to get bigger and bigger with the largest show taking place on Saturday evening.  McNeil, Sayers and Bell threw huge flip combinations, Drake threw amazing whips along with his signature smooth style, Frisby  is definitely becoming more adept and comfy on his bikes as his tricks are as big as they are on his sled.  Hog and Russ brought their free riding skills to the ramps and did not disappoint.  Last, Cody Cavanaugh started the weekend in the wrong direction but made up for it by pulling some crowd roaring back flips on his Yamaha quad.  All in all, the freestyle portion of things could not have gone any better.  Thanks so much to the Butte fans for their support.

We definitely would like to touch base and give many thanks and praise to Keith Sayers.  Throughout this whole event, Keith’s main goal was to do a back flip over Sparky’s restaurant in downtown Butte that measured around 130 total feet from ramp to ramp.  The setup and planned execution could not have gone any smoother.  However, on the morning of the event, Keith was dialing in the distance, speed and trick when an unfortunate mishap occurred.  On his final jump, he went to flip the gap and came up a little sideways which resulted in a nasty wreck.  Fortunately, Keith got up from the crash.  It definitely rattled him but he was still confident that things would work out for the night show.  However, as the stiffness and bruising began to set in, Keith made the decision to forgo the jump.  It was heartbreaking for him as he had put so much time and effort into that particular jump.  Keith kept his composure and graciously apologized to the Butte fans.  The fact remains that the sport of motocross is extremely dangerous and it is always better to be safe then sorry.  We, at SCS, are proud to work with Keith Sayers and applaud him for his continuous efforts to keep the sport of motocross on the map in Montana.  Keep your head up Keith, you will always have a supportive family here at SCS!  With that said, please check out these great photos taken by Devin Karr of the event to get an insight on all the action that you might have missed!